They were talking about her like she wasn’t even there.

Fine. Direct internal thought Taylor stared Proper name, anchoring verb.at the plate of cookies until they blurred. Her throat ached. Not “She’s crying, ” but how does it feel to cry?It’s not like she wanted to be here anyway. She wanted to be home in her little blue bedroom in the house she shared with Mom.Internal thought. Communicates not only mental response, but attitude.

But she couldn’t think about her mother without crying. She swallowed hard.

“Taylor.” Luke—she wasn’t going to call him Dad, no matter what the letter said—touched her shoulder. “Say hi to your Uncle Matt.”

The word thumped into her like a fist. Visceral response. And if it the image is from her experience, it should force the reader to wonder. She already had an uncle. She didn’t want another one.

“Hi, Taylor.” He had a nice voice, deep and kind of quiet.

She shot him a look from under her cap brim. He was wider and older than her... than Luke Her thought patterns, her attitude, with darker hair and eyes and big hands. Taylor looked at the jagged white scar running across his knuckles Significant, specific detail and felt kind of sick and out of breath, like she’d had the wind knocked out of her on the playground. Age appropriate simile

She didn’t say anything. Because we are feeling what Taylor feels, seeing what she sees, I don’t have to explain why

He regarded her silently a moment. “I can see a resemblance.”

Tess nodded. “She has Luke’s eyes.”

“I was thinking she had his attitude,” he drawled.

Stung, Taylor jerked her gaze up. Her Uncle Matt smiled at her crookedly. She observes this. She doesn’t know/I don’t have to say how Matt feels. Her stomach cramped. She ducked her head. Visceral response/physical cue.

She didn’t want him smiling at her.

She hunched her shoulders, slumping deeper in the chair. She didn’t want him noticing her at all. Why not? Create suspense. Maintain secret. Set up character goal.

Not just nervous at meeting her new family or grieving at losing her mother but as angry and anxious as one of the island’s feral cats Simile appropriate to environment and as determined not to show it.

Matt looked at Luke. “Where’s she been the last four weeks?” The last ten years. “Who takes care of her?” White lines bracketed his brother’s mouth. Matt sees this. He doesn’t know/I don’t have to tell you how Luke feels. “I do now. She’s been staying with her mother’s parents. Until the will was probated.”

“You remember the Simpsons, Matt,” Tess said. “Ernie and Jolene?” Back story revealed here and below through dialogue and deep POV.

Dare Island had a year-round population of fifteen hundred souls. Matt knew most of them. Ernie Simpson had worked at the fish house until it shut down, eight years back, and he moved off island with the rest of his family. The son, Kevin, was a few years younger than Matt and a real tool. Matt's vocabulary. The daughter . . .

“You dated Dawn Simpson,” he said to Luke. “Back in high school.”

Dated being the nicest word Matt could think of for screwed every chance you got.

Luke shook his head, still looking grim around the mouth. Observation “Not until the lawyer contacted me in Kandahar a month ago.”

Well, that was something. The situation still sucked, but at least his brother was taking responsibility. The way Matt remembered, Luke had been pretty broken up when Dawn dumped him their senior year and started banging Bo Meekins. More backstory

Matt wondered if his brother had demanded a paternity test. Create suspense.

Not a question he could ask in front of the kid. Anyway, she looked like him, same clear blue eyes, same kiss-my-ass chin. Significant, specific detail

Posted by Virginia Kantra at 10:47 AM

I'm really intrigued. Can't wait to see you at the conference.
Uta Burke

Thank you for sharing this! I hope to see you at a conference one day. :)

Uta, looking forward to it! Now if I can only get the second handout up AND pack!

Gillian, I'd enjoy that! 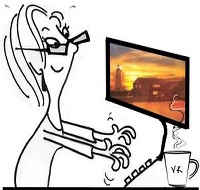 Promote Your Page Too

Find me on Goodreads